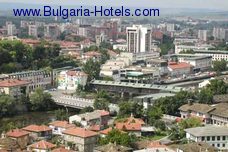 The town of Lovech is located on the borderline between the Danube Plain and the northern foothills of the Balkan and it covers the river terraces of the Osam river. The town is surrounded by a 250 m high plateau, with almost vertical slope toward the East industrial zone. The plateau hill and the slopes are occupied by a forest park Stratesh, the South -west part of which is known under the name of "Varosha". Along its steep slopes the architectural and historical Reserve of the same name is situated, nestled between the hills of Hisarya and Bash Bunar. This is the most beautiful and picturesque part of the town.
Town info